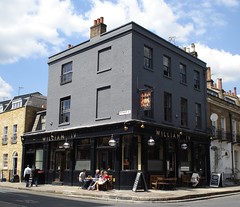 Note: The William IV had a change of management in mid-2010. We haven't visited since, and so our comments below may be out of date.

Kake and Bob visited for lunch on a Tuesday in July 2007. We got there at 1pm and it was fairly empty. The decor is deliberately shabby but in a nice way. Everything's painted white, but it's not really overwhelming. Photos here, here, and here.

The lunch menu (photo) ranges from £3.50 (chips with sweet chilli sauce and sour cream) to £9.50 (fish and chips with peas). About half of the dishes look potentially vegetarian, and the apple, celery, walnut and grape salad (£6.75) might even be vegan. The menu we saw was different from the one on the website, and included a seasonal-sounding dish (summer vegetable and herb soup, £4.75), so it looks like they change it about a bit.

Kake had the smoked mackerel terrine with caper berries and toast (£5.50); it was more substantial than expected, with thick-cut white toast and generous slices of terrine. The terrine itself was quite acceptable, with nice big chunks of mackerel; it's a shame that it arrived fridge-cold, since it was much nicer once it'd warmed up a bit. The caper berries were tasty too. Bob had the pork and leek sausage sandwich (£8.50 with chips, £6.50 without) followed by the almond tart with double cream (£4.50).

Wireless internet access is available (though not tested by us); ask for details at the bar. There are seats and tables outside for the smokers to retreat to. There is also a cat, a piano, and a selection of board games. I assume you're allowed to play the board games, but I'm not sure about the piano.