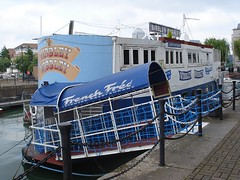 The Wibbley Wobbley was a pub situated inside a boat moored in Greenland Dock on the east side of the Rotherhithe peninsula. According to the Southwark News, it was closed by 2015.

They were doing food during our May 2008 visit, including "roast rib of beef with Yorkshire pudding and all the veggies" (£9.50) and "goats cheese, thyme and red onion tart with proper veggie gravy, asparagus and new potatoes" (£8.50) photo of that day's menu; not sure whether food is served throughout the week.

Accessibility: Fairly steep set of steps down to get in, with very low handrail. Toilets are minuscule, with heavy enough doors that Kake momentarily thought they'd locked themself in.