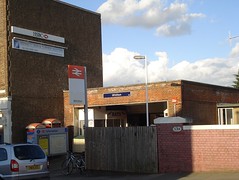 Note that as this is on a loop line, Waterloo trains go either anticlockwise around the loop via Richmond (the quicker way) or anticlockwise via Hounslow and Brentford (the slower way). The trains going via Richmond all come from either Reading or Windsor; the latter call at all stations whereas the former skip a few, and hence are a bit quicker in getting to Waterloo.