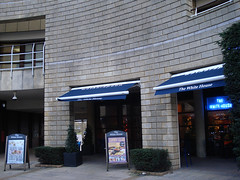 The White House was a Wetherspoons pub between Hayes and West Drayton. According to the June/July 2018 London Drinker, it closed in April 2018 and planning permission has been granted for its demolition.

This is one of a small cluster of food and drink outlets in Stockley Park, a business park which opened in the 1980s on a former landfill site. It's somewhat in the middle of nowhere, though the London Loop passes close by, and the park is served by several buses.

The entrance area is fairly standard Wetherspoons, leading back to a large seating area and even further back to a conservatory-style space looking onto the man-made lake that runs around the sides of the pub photo of conservatory from other side of lake. Lakeside decking seating is accessed from here. There's also a grassed-over seating area to the side of the pub photo.

Kake visited on a Thursday afternoon in December 2014. As is usual for Wetherspoons, no music was playing. There were five or six other customers, but due to the sheer size of the place it still felt empty. There were five real ales on: Thwaites Yule Love It (£1/half), Wetherspoons Low Blow (a collaboration between Fork & Brewer and Everards), Adnams Broadside, Moorhouse Ice Witch, and Titanic Festive Thirty-Five.

Accessibility: No steps to get in, though there's a rather large ridge to get over at the threshold. Step-free to toilets and to most of the seating, but not to the conservatory.