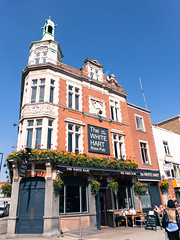 Pub with microbrewery on the Whitechapel/Stepney borders. Not to be confused with the nearby White Hart, E1 7RA, which is just off the bottom end of Brick Lane.

It's reasonably sized inside, with a high ceiling photo, but the space is broken up by pillars with gold-painted mouldings at the top. Large windows let in plenty of light. Tables and chairs are mismatched and packed in fairly tightly. Small sprays of fresh flowers sit in half-pint glasses here and there on the tables. A Fuller's London Pride shield hangs on the wall, though one suspects it's a while since such a traditional beer was on sale here.

The pub incorporates a microbrewery called One Mile End, and mostly serves their own beers. Chalkboards behind the bar list the names, strengths, and prices of the various cask and keg offerings, updated as things go on and off by a staff member perched skillfully on the bar back.

Kake and bob visited on a Friday early evening in August 2015. All the outside seating was taken when we arrived a little before 4:30pm — it was a warm day — but there were plenty of free seats inside. By 6pm it was quite full, with only one free table. Music was playing, but mostly drowned out by conversation. Despite the craft beer focus, the hipster quotient was pretty low.

Five of the six handpumps were on, offering four from One Mile End — Temperance Session Ale (£3.80/pint), Salvation Pale Ale (£4/pint), Ancho Cocoa Stout, and White IPA — plus Redemption Trinity. A pint of lime and soda was £1.60.

Service was friendly and helpful, and after we ordered food a bottle of chilled tap water was brought to us with no need to ask for it. One of the staff even came round offering to close the blinds if the people sitting by the windows were bothered by the sun. Free wireless was available, with the password printed on the menus (and presumably also available from the bar).

Kake and bob started with one of the sharing platters, which included Spanish charcuterie, sardines, manchego, olives, pickles, and bread (£12) photo. The meat was good quality, sliced thinly, and served at the right temperature. The sardines were nicely meaty and free of bones. The olives were very good, stone-in and marinated in smoked paprika, and the pickles were well-balanced. The bread was fine, though it came in a single large chunk, which seemed a bit odd for a platter intended to be shared.

bob's main course was harissa roast lamb shank with sweet potato chips and an aubergine, courgette, and pepper ragout (£15) photo. The lamb was nicely tender, though the harissa was almost undetectable. The ragout was pretty tasty, with a nice umami flavour coming from somewhere; we wondered if they'd included some lamb stock or fat in it.

Kake's main of dolcelatte arancini with tomato ragout, baby spinach, pesto, and tenderstem broccoli (£10) photo was also good. The arancini were a good size, and had a nice crisp exterior without being mushy inside. The broccoli was cooked just right. There were three arancini, which was just the right amount to be filling but not heavy.

Accessibility: No step to get in, and there's a RADAR-locked accessible toilet with nappy change on the level. Other toilets are down a flight of stairs with a bend in the middle and a handrail all the way down on one side and most of the way down on the other. The cubicles in the ladies' are quite a squeeze to get into.