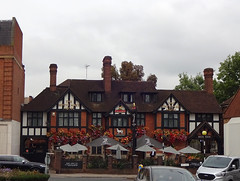 It's fronted by a large patio filled with basketwork chairs and umbrella-topped tables, offering a view onto the junction of three busy roads. Entry from here is into a small space with the bar on the right and a couple of tables for drinkers. To the left is a dining area, ready-set with napkins and cutlery, and further in past the bar is another small seating space with upholstered banquettes and leather wingback armchairs; this doubles as the hotel lobby, with a receptionist behind a tall curved desk in the corner and a door leading through to "Bedrooms & Lift".

Flooring is a mix of bare boards and wooden blocks arranged in an attractive geometric pattern, while wood panels cover the walls. A stuffed stag's head is mounted over the large, unused fireplace in the "lobby", and various local-themed prints are on the walls, including a plan of the Thames. In one corner, a basket holds blankets for drinkers wishing to sit outside in chillier weather.

When Kake visited on a Monday morning in September 2019, there was just one other customer when I arrived around 10:30am, but a couple of others turned up while I was there, and hotel guests were also in and out. Easy-listening music was playing quietly. The handpumps were clipped for London Pride, Rocky Red (a Fuller's seasonal), and Dark Star Hophead. A pint of lime and soda was £1.10.

Accessibility: A small step from the patio (around an inch), and then a ramp to get in. Toilets are on the level once you're in, including a RADAR-locked accessible one with baby change facilities.