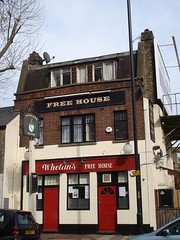 The decor is quite basic, with bare floorboards and wooden chairs and tables. The room is narrow, with a small open area at the front leading back to a narrow area alongside the bar and then a pool table at the back. There's a dart board towards the front too, and a couple of small leather armchairs near the door.

Kake has visited a couple of times now, with varying levels of enjoyment. On a Wednesday early evening in June 2009 there were at least a dozen other people in, all of whom seemed to know each other. There was plenty of lively conversation going on, and service was friendly. Various TVs were showing cricket with the sound on. On a Tuesday afternoon visit in March 2010 there were two or three other customers in, watching the cricket and chatting with the landlady. On a Thursday evening visit in April 2011, service was again friendly, though the customers were rather more rowdy than on our previous visits. On a Wednesday evening in October 2011, although there were very few customers in, two of them were bordering on hassling us, to the point where we drank up as quickly as possible and left.

Accessibility: A step up to get in. Step-free to the ladies' once you're in.