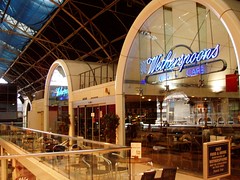 This is a standard issue glass-and-chrome modern structure, overlooking the platforms in between the two halves of the station and can be reached by stairs on one side and escalators on the other (there's also a lift).

Inside, the bar is split into two halves, with seating filling each of the two large spaces, as well as extra tables alongside the balconies on either side of the pub, overlooking the station. It's all undercover of the station roof, so there's obviously no smoking areas.

Each half of the bar has five handpulls for ale, and on a June 2009 visit these were Ruddles IPA, Abbot Ale, Marston's Pedigree, Welton's Quatre Bras, and Burton Bridge Porter (£1.25/half). They also have the standard lagers and bottled beers as other Wetherspoon's pub, and use the same standard food and drinks menu.

The place fulfils its role as a station pub for those with time to kill before their trains leave, at the very least offering more in the way of ales than the other two pubs downstairs in the station (The Iron Duke and The Mash Tun).