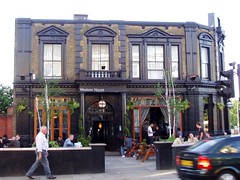 A pleasant pub at the top of the hill overlooking the park at Crystal Palace.

It was previously operated by Antic, but in late 2020, a notice appeared on the Westow House website stating that several pubs, including this one, had been taken out of the hands of Antic and transferred to the management of Portobello Brewing. In November 2021, Portobello announced that it had acquired the freehold. We haven't visited since the transfer, and so some or all of the details below might be out of date.