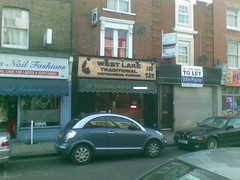 Now closed; was a Vietnamese restaurant in Deptford. As of January 2014 the premises are occupied by Pho Hanoi photo.

Pretty decent Vietnamese restaurant in Deptford. It's cafe-style, brightly lit with a tiled floor, and seats 28. Note that they aren't licensed, though they do allow BYOB.

bob first visited on a Thursday evening in December 2008. At 8:30pm I was the only customer, though another group turned up 30 minutes later. The service was fine albeit a little perfunctory at times; the staff were having more fun playing cards.

I had tea in possibly the world's smallest tea cup photo. To eat I had bún bò huế (spicy beef noodle soup; £5.50) photo. The staff warned several times that this was very spicy: I found it to be adequately spiced, though other people may find their warnings more useful. The beef was very thin and obviously only cooked by the warmth of the stock. It was certainly very tasty and good value. I also had Vietnamese spring rolls (£5.50) photo. These were quite tasty and larger than I'm used to.

Kake, bob, elvum, and Claire visited again on a Thursday evening in February 2011. We were the only customers when we arrived around 9pm, and remained so throughout our visit. Music (we guessed Vietnamese) was playing, though not annoyingly loud. Service was again a little perfunctory, with the member of staff on duty disappearing for long periods of time, and quite a long wait for refills of tea and tap water.

Chim cút rô-ti (fried roti quails, £8) photo had a good texture but were a little underseasoned. It's possible that we were meant to remedy this ourselves with the small dish of spiced salt that arrived at some point during our meal, but it wasn't made very clear which dipping sauces were meant to go with which dish.

Thịt bò cà-ri (spicy coconut beef curry; £6) photo wasn't to Kake's taste, being more along the lines of a Japanese curry than an Indian or British (or even Thai) one, but it was fine for what it was. Thịt gà rang gừng (fried chicken with ginger; £6) photo was better than we'd expected given that it was made with chicken breast; the meat wasn't mushy at all and actually had decent flavour. Mực nướng xả ớt (grilled squid with chilli and lemongrass; £6) photo was fine.

Accessibility: One step up to get in. Toilets are down a small, narrow flight of stairs (four steps) with no handrail.