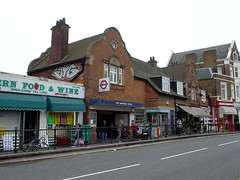 Zone 2 Tube and rail station on the Jubilee Line, Thameslink, and North London Line (on the London Overground).

It's actually three separate stations (photos of Thameslink station and Overground station), but you can interchange freely between them to let you finish your journey on the same ticket. Now that the North London Line is part of London Overground, this is also the case for Oyster PrePay (i.e. you'll only get charged for one continuous journey, rather than two separate ones).