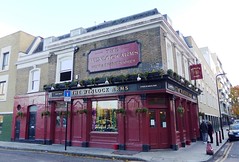 Pub near Old Street, in the less trendified western edge of Hoxton. It's had a couple of changes of management over the years; see earlier version of this page for details.

bob and others visited on a Tuesday evening in March 2018. There were a few tables left when we arrived around 6pm, but it soon filled up. A game of darts was going on in one corner.