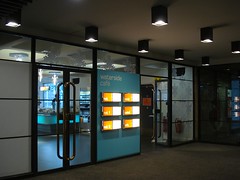 The information below is retained for people who want to know what it was like as the Waterside.

A cafe in the Barbican Centre.

There are counters selling a selection of hot meals (usually three, including one vegetarian option) for about £7. The food is okay but can be cold. There are also separate counters with desserts. Sandwiches, salads and other cold food options are in a chiller near the door.

You can sit outside by the fountains which is nice photo. Beware of the pigeons though — you basically can't leave your table.

secretlondon visited in June 2008 with someone who gets discounted food as a staff member. She isn't sure she'd pay full price. Ewan was perfectly happy with the hot meal he had when visiting in November 2008 (but received a discount via his work).