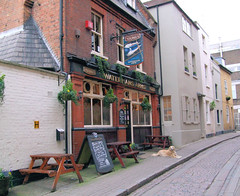 According to the June/July 2019 London Drinker, as of that date the Waterman's Arms had closed "for major refurbishment under new tenant". According to its website as of January 2020, it "reopened on 21st November 2019 after a complete top to toe refurbishment". We haven't visited since, so some of the details below may be out of date.