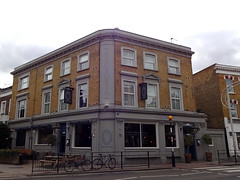 Pub and hotel in Peckham, run by the Metropolitan Pub Company (Greene King). Refurbishments over the years have seen the conversion of their children's playroom into a private dining room, as well as several other changes (see old version of this page for what it was like pre-2018).

There are no interior partitions, just a single space wrapped around the U-shaped bar, but pillars break it up into three distinct areas. Entry is into a drinking area with primarily high table and stool seating, and an open kitchen at one end. At the curve of the bar is a smaller, cosier area with padded banquettes, and finally further around is a dining area with slabby wooden tables ready-set with water glasses, cutlery, and thick white paper napkins.

The decor is more coherent than it has been in past incarnations, with neutral-painted walls, dark wood, and exposed brickwork. Varnished boards on the floor give way to checkerboard tiles around the bar.

Kake visited on a Tuesday morning in August 2018. There were just two other customers when I arrived a little before 10:30am, at least one of them being a guest in the hotel accommodation above. Ska music was playing, not too loud.

There are two banks of five handpumps each on the bar, though clips for only four real ales on our visit: By The Horns Calypso Carnival, Truman's Lazarus, Sambrook's Pumphouse Pale Ale, and Greene King IPA. A pint of lime and soda was £1.30.

From their breakfast menu photo I chose the "bacon butty" (£6) photo. The bacon was decent quality (albeit perhaps a little salty), and cooked relatively crisp, which worked well against the softness of the bun. The bun itself was brioche-style, and its slight sweetness was again a good contrast to the bacon.

It arrived semi-deconstructed, with two long bacon slices poking out from the small bun, and it was a little annoying to have to cut them in half myself to make them fit properly. There was also an unnecessary puddle of grease on the plate. I mention these annoyances mainly because £6 is quite a lot for a bacon roll.

Service was fine, though seemed clearly more aimed towards diners than drinkers. The staff insisted that I sit at a table and let them bring my drink and a menu to me instead of letting me order at the bar, and even after I'd obeyed and ordered at my table another member of staff swooped over to ask if I wanted to order any food.

They have free WiFi via The Cloud, which requires registration.

Kake's verdict: I might come back for food, but probably not just for a drink.

Accessibility: A step at one entrance but only a tiny ridge at the other. The seating is all on the flat, as is the RADAR-locked accessible toilet. There's a small step to the other toilets and the private dining room.