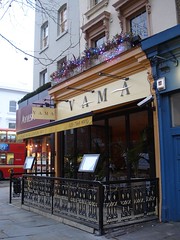 Vama was an Indian restaurant on the Kings Road in Chelsea. It closed in early 2010, and the premises were taken over by a new branch of the Bombay Bicycle Club, though this later closed in turn. As of April 2011, the site is occupied by another restaurant called Medlar.

Those who wish to know what Vama used to be like should consult the Londonelicious review.

As of September 2011, Caterer And Hotelkeeper reports that Andy Varma, one of the chefs behind Vama, will be opening a new restaurant called Chakra in Notting Hill.