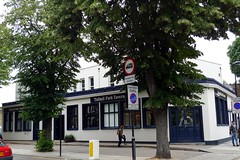 It's quite spacious inside, and there's a separate restaurant area to one side. There's a large paved beer garden out the back.

According to their website as of May 2013, they serve pizza "all day", and main menu food is available noon-3pm and 6pm-10pm Mon-Sun (though stopping at 9:30pm on Sundays).

In August 2011, Ewan's party had the goat's cheese tart photo and a salad photo.

In May 2013, Kake, Ewan, and other Tube Walkers had no problem finding a table on a Saturday afternoon, though this was probably helped by the fact that a fair few people were in the garden.

Accessibility: There's a RADAR-locked accessible toilet, though this doubles as the baby-change facilities. (A RADAR key is available behind the bar for those who don't have their own.) There's no step to get in, though the threshold is a little bumpy. It's step-free to the bar, accessible toilet, and most if not all of the seating once you're in.

Child-friendliness: On our Saturday afternoon visit, there were quite a few children in. The staff (and other customers) didn't seem too perturbed by us letting our 1-year-old have a quick crawl about on the floor. As noted above, there are baby-change facilities: a large RADAR-locked (key available from the bar) toilet cubicle with a reasonably-sized pull-down changing table including a strap, though there's a slight lack of flat surfaces to put your nappy bag etc on.