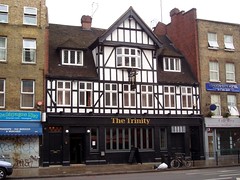 Nice enough pub next to Borough Station. It's the modern kind of pub, with lots of pale wood and people drinking wine, but they do actually have decent beer and cider on as well. Abbot Ale was £2.90/pint, and we also tried the Leffe and the Stowford Press cider.

They do food, which looks on the interesting side of standard, but we didn't try it. Food is served noon-9pm Sun-Wed and noon-10pm Thu-Sat.

The menu and the beer list are available on their website. The interweb says they do a decent range of cocktails too.

One for another visit some time, I think, especially since it's quite ridiculously convenient for Borough Station.