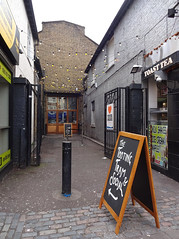 Bar and music venue run by Antic, situated in a cavernous former tramshed near Tooting Broadway Station. It's easy to miss, as it's accessed via a small passage off the street, between two shops, and there's no name over the door.

Previously more pub-like (see our previous writeup for details), as of early 2016 it now brands itself as a bar, music venue, and nightclub. There's generous seating in booths and banquettes on a dais along the wall opposite the bar, and on a mezzanine above, but seats are scarcer in the main space, with plenty of standing room cleared in front of the large DJ station at the back.

Kake visited on a Thursday afternoon in April 2016. There were only two other customers in when I arrived at 5:15pm. A DJ was setting up at the back of the room, and music was playing so loud I'd have had no chance of following a conversation.

There are only two handpumps on the bar, and neither of them were clipped. Small chalkboards on the bar next to them advertised Brewdog Vagabond Pale and Jackhammer, but it wasn't clear whether these were on cask or keg. They also had keg taps for a few things including Brewdog Punk IPA. A pint of lime and soda was free, which was nice, but served in a plastic glass, which was not.

They no longer appear to do any food, not even the sausage rolls we've previously enjoyed here.