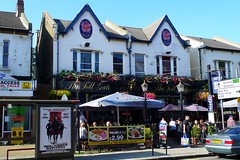 It's larger than it looks from the outside, as it's spread over a double shopfront and goes back quite a long way. Other than that, it's a fairly typical Wetherspoons of the "shop parade" variety, with a low ceiling and little natural light. There's a fair bit of outside seating at the front, looking onto Turnpike Lane.

Bec, Ewan, Kake, and Katie visited on a Tuesday early evening in August 2013. There were a fair few people in when the first of our party arrived around 5pm, though still plenty of free tables. Service was cheerful and friendly, and the bar staff kept careful track of who was next to be served at the bar. A pint of Westons Wyld Wood cider was £2.85.

Like all Wetherspoons, they serve food all day. On our visit, a plate of chips (£2.40) arrived practically instantaneously, though the chips still tasted freshly-cooked rather than reheated.

Accessibility: A ramp to get in. Once you're in, it's stepfree to the bar, toilets (including an accessible one) and most (possibly all) of the seating.