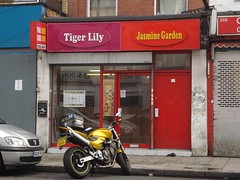 Takeaway on the Old Kent Road, advertising Chinese, Thai, Japanese, and Vietnamese food. (They traded for a while under the name Jasmine Garden, but changed this to avoid confusion with other Jasmine Gardens in the area.) They also do delivery, and offer online ordering via Hungry House.

Most of the menu is taken up by Chinese dishes, though they do have pho (which they spell "phur" — according to an email from the owner, this is because their customers had a lot of trouble pronouncing it), a few katsu and sukiyaki dishes, and a separate Thai section of "X in Y sauce" dishes.

Kake and bob first tried the delivery option on a Saturday evening in August 2009. Vegetable dumplings (£3.60; but no longer on the menu as of July 2010) weren't bad; they had nicely chewy, doughy, competently-fried wrappers that worked quite well, but the filling was a bit dull and tasted mainly of cabbage. Peking dumplings (£3.60) had similarly satisfying wrappers and fairly average but not bad pork mince filling. Edamame in a spicy tempura sauce (£2.60) turned out to be regular edamame (boiled green soya beans still in the pod) sitting in a paddling pool of soy-sauce-based sauce with chilli flakes in — interesting and tasty enough (with the obvious caveat that edamame are better eaten immediately than stuck in a box for delivery), but a bit messy to eat.

Salt and pepper tofu (£3.60) had a pleasing texture and a competently-fried light batter coating, though the latter was a little saltier than optimal, and the pepper tasted more of pre-ground grey dust than freshly-cracked black peppercorns (when we tried this dish again a couple of months later, it was underseasoned). Crispy duck (£6.50 for a quarter duck) came pre-shredded (with the bones thrown in for some reason) and was fine.

Kake gave them another go in November 2009, focusing on the Vietnamese options this time. The food took two hours to arrive, which was longer than expected. Prawn summer rolls (£3; but no longer on the menu as of July 2010) weren't bad, though they were heavy on the noodles and light on the prawns. The wrappers were quite thick, which may have been a deliberate decision to make sure they made it through the delivery process (Banzi's wrappers are thinner but always split by the time they get to us).

Vietnamese salad (£3.80) was tasty and crunchy, with a nice hit from the red chilli slices (though another order of this in April 2010, with the grilled chicken option, was just plain weird, since the chicken had a coating of what tasted like pizza herbs, clashing badly with the other flavours). Pho/phur (£5.50) with a spicy base (50p extra) came pre-assembled (possibly again because of the customer confusion mentioned above). The broth was rich and just spicy enough — but there wasn't enough of it, the noodles were all stuck together, and they sent me chicken instead of the rare beef I'd asked for.

On Kake's most recent order in July 2010, Thai green vegetable curry (£3.80) was pretty bad, with murky flavours and not even a hint of the fresh green chilli flavour it should have had. Jasmine rice (£2 for a small portion) was fine, though. Salt and pepper mushrooms (£3.80) had the "grey dust" problem mentioned above, though were otherwise OK. Barbecue spare ribs in sauce (£4.30) were actually fairly good; the meat wasn't dry, and the sauce wasn't too sweet.