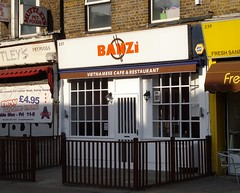 Banzi was a small Vietnamese restaurant near Surrey Quays Station; it has now closed.

It initially closed for refurbishment in early 2010, then reopened around April 2010 with a new head chef from Vietnam and a new name, Huong Sen photo. By October 2010 the premises were occupied by another Vietnamese restaurant called Viet Diner, and by April 2012 this had been replaced by a Vietnamese and Chinese restaurant called Thu Do photo. Thu Do in turn had closed by March 2014 photo.

The information below is retained for people who want to know what it used to be like as Banzi.

Small Vietnamese restaurant near Surrey Quays Station, opened in March 2009. They also do takeaway and delivery.

It has seating for about 35 people inside, mostly at four-tops. The decor is clean and simple, with white walls set off by orange lampshades, dark red banquettes, and simple cafe-style tables photo.

Kake and bob visited on a Saturday afternoon in April 2009. There were a few other customers who came and went during our visit, but there was no problem finding us a table by the window. Heart radio was playing.

We started with Vietnamese spring rolls (£3.50) photo; these weren't bad at all, with plenty of vegetables inside as well as meat. They were freshly fried, too. Kake's only criticism might be that they were perhaps very slightly overcooked, with the wrappers being a little hard in places (this had been rectified by the time we tried them again in August 2009).

To follow, bob had pork and pork skin rice (£6) photo. The pork was quite nice, properly chargrilled with a good barbecue flavour. The pork skin was interesting, but I don't think I'd order it again. It was chewy rather than crisp. The rice was fine.

Kake had grilled pork banh mi (£4) photo. This was my first ever banh mi, so I'm not an expert on what they should be like, but I was happy enough with it. The baguette was better-quality bread than the bog-standard fake "baguettes" you get in some places, and the crust was crackly but not too hard, which is the way I like it. The pork was moist and flavourful, the pickled vegetables were crunchy and only lightly pickled, and the pate had a decent bit of texture to it. My only regret is that there were no chillies included (this had been rectified by the time I tried it again in October 2009).

We visited again a couple of weeks later, this time on a Tuesday evening. Again, there was no problem finding us a table. This time we started with salt & chilli squid (£4.50) photo and summer fresh rolls (£4 then, £4.50 as of August 2009) photo. The salt & chilli squid was fine, neither greasy nor soggy, and not overcooked. The summer fresh rolls were OK; though Kake would have liked to taste more herbs, and there was also a slightly muddy flavour to the prawns suggesting they could have been cleaned a bit more carefully (this had been rectified when we tried them again in August 2009). I preferred the summer rolls I had a couple of days later at Mama Pho down the road.

We followed this with pho bo tai (rare beef noodle soup, £6.50) photo for bob and pork & preserved egg congee (savoury rice porridge, £6) photo for Kake. Both went down pretty well, and Kake would happily return for more of the congee, which had added textural interest from the slices of fried dough stick served on the side. Sadly, a takeaway order of chicken congee a couple of months later did not include dough stick.

They also do delivery, and Kake and bob gave this a go in August 2009. Deep-fried frog legs (£6) weren't bad; the meat was nice and tender but the batter coating was very salty and also slightly sweet in a rather unpleasant way. Summer fresh rolls (£4.50) were fine but the wrappers had all burst in transit (this was again the case on another order two months later). Kake's chicken rice (£6) was really good; very flavourful and tender-but-not-mushy chicken with a modest amount of fat and plenty of crispy skin — a simple dish done well. bob had pho bo tai (£6.50) again, and was again pleased with it, though Kake tasted the broth and felt that it was oversalted and lacking depth.

Accessibility: Step-free access to get in, but the toilet (a single unisex cubicle) is down one step.