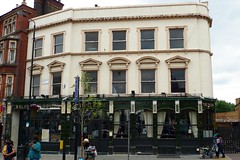 Pub on Camberwell Green in Camberwell, run by Antic. It opened in February 2010 on the site of the old Silver Buckle — a return to an earlier name.

The main room has a cluster of sofas in the centre, a few high tables by the door, and normal chairs and tables of various sizes in the rest of the room. The floor is exposed floorboards, and large old-fashioned radiators line the walls. There's very little natural light, but standard lamps perch on the windowsills. The ceiling is high, and long curtains are tied back at the edge of each window. Two other smaller rooms sit off to one side.

On Kake's September 2010 visit, the real ales were Old Peculier (£1.65/half), Hobgoblin, and Deuchars IPA (the other handpump had a clip for Doom Bar, but turned around to indicate it was off). Music was playing, sort of experimental-ish (I can't think of a better way to describe it). On another visit in January 2011, the Old Peculier had gone up to £1.70/half, and the other ales were Deuchars IPA, Sharp's Doom Bar, and one from Caledonian.

According to the Tiger website, as of January 2011 food is served 5pm-10pm Mon-Fri; noon-4pm and 6pm-10pm Sat; and noon-6pm Sun. The menu photo has vegetarian and vegan dishes marked (one vegan and two vegetarian starters, and two vegetarian mains, as of Jan 2011). In January 2011, Kake tried the mackerel mousse with toasted bread (£3.85). This was pretty good, a nice smooth mackerel paté garnished with sundried tomato strips, a slice of red chilli, fresh parsley, and some really delicious tiny cornichons. The accompanying "toasted bread" was a generous quantity of some pretty decent bread with grill marks (so not really toast as such, but it worked).

Kake's verdict: I'd come back, and I'd happily try more of the menu.

Accessibility: One step up to get in. Level access to the main seating area, bar, and toilets (including a dedicated accessible one) once you're in.