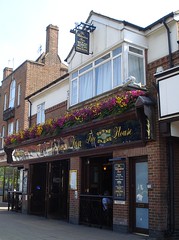 Built in 1999 on the site of an old petrol station, the pub's interior has fairly standard Wetherspoons features, with a low ceiling and traditional decor, though the lighting is better than average for this type due to a large skylight in the centre of the pub. It's not a large space, though room has been found for a single instance of the Standard Wetherspoons Booth. It also has some outside seating at the front, in a little area marked off from the pavement with some robust-looking planters.

Kake visited on a Thursday afternoon in July 2013. There were a fair few people in, and a good buzz of conversation. No music was playing. A flatscreen was showing golf with the sound off.

The Wetherspoons cider festival was on, and they had at least four of the festival ciders/perries, plus four or five interesting-looking real ales. A half of Waddlegoose Lane cider was £1.05.

Child-friendliness: A sign on the wall (as of July 2013) states that children are welcome until 9pm, with last food orders at 8pm.

Accessibility: Step-free to get in, and there's an accessible toilet on the ground floor. Other toilets are up a flight of stairs with a sturdy handrail on both sides (though the stairs are too wide to use both handrails at once).