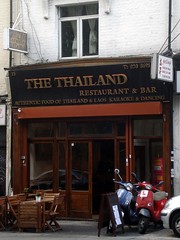 As well as the usual things you might expect from a Thai restaurant in London (tom yum, Thai fishcakes, red and green curries), they also have more interesting stuff such as Thai spiced sausages, chargrilled beef wrapped in pepper leaves, and an entire section of Laotian dishes.

Kake, bob, and doop have tried the delivery option a few times now, most recently in January 2011. The food has always arrived on time, though we've occasionally noted a few packaging issues, with the soup tending to escape from the tubs and end up pooled in the bottom of the bag.

Tom yum soup (£4 for the chicken option as of Aug 2010) had a well-flavoured stock base. bob would have preferred more chilli heat in the stock, though the pieces of fresh and pickled chilli included were hot and very tasty.

Bo la lope (skewered beef wrapped in pepper leaves and grilled; £7 as of Jan 2011) was a generous portion, and well-cooked, with the beef nice and tender. Although the leaves appeared a bit greasy on first sight, this turned out to be appropriate for the dish and quite enjoyable.

Thai spiced sausages (£5 as of Aug 2010) weren't particularly spicy, but were quite good; tiny, plump, moist sausages with a fairly coarse texture, tightly packed in their skins.

Ka lampee yadsai (£5.45 as of Jan 2011) turned out to be flat patties of pork mince threaded through with glass noodles, wrapped in cabbage leaves before being steamed and fried. These were very tasty; the noodles adding a nice texture to the pork, and the cabbage almost caramelised from the frying.

Lao-style green papaya salad (£7.45 as of Jan 2011) had plenty of spiciness and a nice flavour balance in the dressing. The shredded papaya and other vegetables were fresh enough, too. They also offer a Thai-style green papaya salad (som tam); it's not entirely clear what the difference is between the two, though the Thai-style version is described as including dried prawns (despite being listed in the "vegetarian dishes").

Hot and sour fruit salad (£7 as of Aug 2010) worked surprisingly well, both sweet and savoury, with halved grapes, pineapple, and other fruits combined with a sliced red onions, chopped red chillies, and a light, savoury dressing.

Spicy silver noodle salad with prawns (£7 as of Aug 2010) was OK, but the prawns tasted a bit muddy.

Pla prawn (raw king prawns marinaded in fish sauce; £8 as of Jan 2011) included eight nicely-sized king prawns in a tangy yet well-balanced marinade with chunks of raw garlic, red chillies, lemongrass, red onion, and rind-on lemons. The prawns had a lovely texture, lightly "cooked" by the marinade, and the garlic was noticably present and aromatic without being dominant. Kake really liked this.

Nam prik krapi with pla too (shrimp sauce with fried fish and steamed vegetables; £7 as of Aug 2010) turned out to be a single small fish, fried whole, served with steamed broccoli and bamboo shoots (large chunks, not slices-from-a-can) and a tub of nicely fishy chilli-and-fermented-shrimp sauce (nam prik kapi).

Pork nam tok (chargrilled pork; £7 as of Aug 2010) was nicely cooked, not dried out at all, and had a very flavourful herb-and-spice dressing.

Oom (£6 for the aubergine option as of Aug 2010) was a little confusing; listed on the menu as "bamboo cooked in chilli, sweet basil, cabbage, lemongrass, lime leaf and galangal with soup", it appeared not to contain any bamboo shoots, just the aubergine.

bob's verdict: Very good, and the chilli level was just about right. I'd like to give their more "normal" Thai dishes a go too.

Kake's verdict: I'd definitely order from here again — the chilli heat in one or two of the dishes was just at the top of my tolerance level, but I can cope with that for the sake of trying out more of the unusual items on the menu, and many of the other dishes are a lot milder.