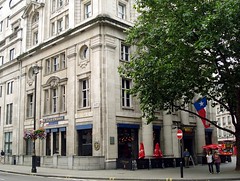 The Texas Embassy Cantina was a Tex-Mex restaurant on the corner of Cockspur Street and Pall Mall East, near Trafalgar Square. It closed for good in June 2012, with a post on their Facebook page explaining that this was due to the sale of the building.

Tex-Mex restaurant on the corner of Cockspur Street and Pall Mall East, near Trafalgar Square.

Kake and friends visited on an early Saturday evening in May 2008. The tables outside were all occupied and we were told it would be a 30-minute wait for an inside table, but since we were only planning to have cocktails and a snack we could sit at the bar immediately; we chose this option. Service was friendly enough, though slightly confused as they seemed to be training a new member of staff.

The cocktail menu wasn't particularly long, but apparently there's a more extensive choice in the upstairs bar. Kake's first Embassy Margarita (£5.50) was fine; but, bizarrely, when we ordered our second round of cocktails, the bartender warned that they'd run out of the glasses used to serve straight-up margaritas; we handed him the one Kake had been drinking out of and he washed it before refilling it, but not very well as the new drink had a small accumulation of salt at the bottom.

As well as cocktails, we shared a Texas Rose photo, which is basically an onion which has been partly sliced and then deep-fried in batter (aka "blooming onion"). It cost £5.50 and was a decent enough nibble for three people, but was almost entirely raw in the centre. The dip that came with it was advertised as garlic-cilantro mayonnaise, but tasted of neither garlic nor cilantro.

Accessibility: Toilets are upstairs, but they will let you use the service lift to get up there if you need it.