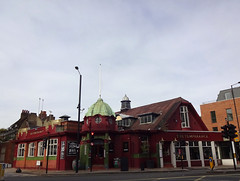 Stonegate pub in Fulham, on Fulham High Street. It was previously part of the Mitchells & Butlers "unbranded" Castle sub-chain, but according to the April/May 2011 edition of London Drinker, it was acquired by Stonegate in October 2010.

It's a single rather cavernous space inside, with a double-height ceiling and a large square island bar in the centre photo. Tall stools are drawn up at the sides of the bar, and there's plenty of standing space around this. Seating is provided by padded banquettes lining the walls, and freestanding tables and chairs up a couple of steps to one side. A flight of stairs gives access to a mezzanine overlooking the main space. Flatscreens are arranged around the room, including a large pull-down projection screen.

The pointed ceiling space is filled with industrial-looking piping and struts. and there's some interesting Art Deco stained glass in the windows, particularly one large curved one at the front. Large graffiti-style tags adorn the walls, and an area of fake-brick wallpaper in one corner invites patrons to "tag a brick" (but to "keep it clean!!!"). Flooring is a mix of worn varnished boards and checkerboard tiles.

Kake and bob visited on a Tuesday lunchtime in October 2018. Arriving at their opening time of noon, we were among the first five customers of the day. '90s music was playing, not too loud, via MTV Classic, with the accompanying videos showing on the flatscreens. Service was friendly, welcoming, and helpful.

Ales available were London Pride and Sharp's Doom Bar. A half of Pride and a pint of lime and soda came to £3.25.

Dog-friendliness: According to a sign seen in October 2018 photo, they are dog-friendly and will provide water and treats for dogs.

Accessibility: Two large steps to get in. Once you're in, there are no further steps to the toilets, including a RADAR-locked accessible one.