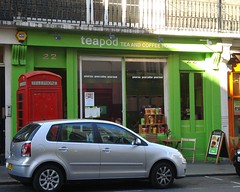 Teapod was a tea shop on Wellington Street in Covent Garden. It closed for good some time around September 2011, though their other two branches remained open (the original on Shad Thames near Tower Bridge and the cafe in the Fashion Museum on Bermondsey Street).

As of May 2012, the premises have been acquired by champagne supplier French Bubbles, who intend to open a bistro and champagne/cheese shop called Champagne + Fromage.

The information below is retained for people who want to know what it used to be like as Teapod.

Tea shop/cafe in Covent Garden, on Wellington Street where Bou Tea used to be. The original branch is on Shad Thames near Tower Bridge, and they also have a cafe in the Fashion Museum on Bermondsey Street.

The walls of the Covent Garden branch are painted in Teapod's characteristic bright green and pink, and the tables and chairs are pale wood. A display holds packets of tea to take away and brew at home.

The menu offers black, green, white, red (rooibos), and herbal teas, as well as iced teas and various coffees. Caffeine-free and low-caffeine teas are clearly marked. Cakes are displayed at the counter, and they also do breakfasty things like porridge, plus salads, quiches, jacket potatoes, and soup. As of May 2011, a full afternoon tea is £13.50 per person or £25 for two.

Order at the counter and they'll bring your tea to you. They'll tell you how long to leave it to brew, and there's a screen on the back wall with a timer so you can get it right. A little card with information about your chosen tea comes along with it.

Kake visited on a Tuesday afternoon in May 2011. There were a couple of other customers in, but plenty of space. Music was playing, not too loud (and the staff turned it down when a louder song came on). I had a pot of bai hao silver needle (£2.45), which was fine.

Accessibility: No real step to get in, just a small ridge. It's also step-free through to the toilet (a single relatively large room/cubicle), though there is a slightly tight corner along the way.