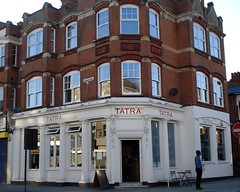 Tatra was a modern Polish restaurant on Goldhawk Road in Shepherd's Bush. According to Google Street View, it closed down by November 2017.

secretlondon, James and Peter went one Tuesday in May 2009. James and Peter lived locally and had been three times before. There were only two other tables occupied so we wouldn't have needed to book. We were each given a complimentary iced pear vodka photo and a plate of bread and smalec (seasoned pork fat for spreading) photo to share.

They had a sheet at the beginning of the menu for daily specials of all three courses. We generally stuck to the main menu and had a bottle of house red (£13.50) and a jug of mineral water (£3.80). I don't know if tap water was available.

For mains we chose golonka (pork shank) photo which James had had three times before. Chicken Kiev came with cabbage photo and I had schabowy (pork escalopes, £11.50) photo with mash potato and mizeri (cucumber with dill) photo. The portions were very large and the food good, but vegetarians would have trouble finding much suitable on the menu.

For dessert we had apple pie photo, sorbet photo and I had a wonderful crepe filled with cheese and raisins photo.

With an espresso to finish we paid £32/head, including service. We didn't start on their range of flavoured vodkas including black pepper and lemongrass.