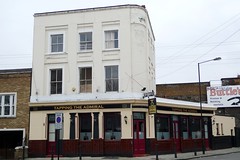 A pub near Kentish Town West Station, opened by the people behind The Pineapple in nearby Kentish Town.

A short walk down a back street from the station is this pub, which despite being rather difficult to stray across, is well worth a visit. In some ways not dissimilar to the Pineapple, this is a modern version of a locals' pub, serving the community but also a pleasant place to spend some time as a visitor. The decor is recycled vintage and antique posters (some perhaps in less advisable taste, such as the huge one of Uncle Tom's Cabin), but there are comfortable booths for seating, as well as stools along the bar, and a beer garden in the rear.

The focus at the bar is very much on ales, with eight handpulls dispensing a variety, with Dark Star Hophead, Adnam's Broadside, Black Sheep Bitter, Truman No. 8 and others available on Ewan's February 2012 visit. All were well-kept. At the time of writing (March 2012), the website lists ales by Brodie's, Dark Star, Redemption, Meantime, Hewitt's and others as being available. There are decent draught keg beers, including Black Isle Organic Porter, Licher Weizen, Meantime London Lager, Kostritzer Black Lager, Konig Pilsener, Aspall's cider and others. There were additionally two boxes of Millwhite's cider in the fridge on Ewan's visit. They have some homemade vodka infusions and a large selection of spirits too.

On a Saturday afternoon visit, music was playing (not too loudly) and part of the pub was taken up with a christening celebration. Menus for food were available, featuring Thai food as well as some non-Thai options, though as of April 2012 their website states that a new British food menu is now in force, focusing on pies and small plates.

According to their website as of April 2012, quiz night is Wednesday from 8:30pm