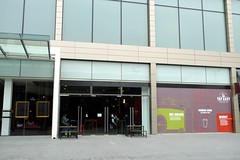 A microbrewery and beer bar just by Stratford International Station, at the edge of the Westfield Stratford City shopping centre. It opened with the centre in September 2011 (although the microbrewery didn't open until 14 October), and is operated by the people behind Utobeer in Borough Market.

This small space sits at the very edge of the Great Eastern Market area of the shopping centre, looking out onto the entrance to Stratford International Station. In the bar area there are eight high tables with stools, as well as two rings of comfy sofas and armchairs photo. There are also a couple of tables outside by the shopping centre entrance. The microbrewery itself is visible through glass doors to the side of the bar.

There are six handpulls for ale and eight or more draught taps at the bar, and the options for these are also listed in the menus on the tables photo. On Ewan's October 2011 visit, they had Thornbridge Brother Rabbit (£3.50/pint) and Oakham JHB (£3.50/pint), as well as Grolsch (£3.90/pint) and Harviestoun Schiehallion (£4.20/pint) on draught, with more options on a return visit in August 2012, several clearly guests which change regularly. On Kake's March 2012 visit the ales included several brewed in-house, including East End Mild (£1.65/half), which was tasty but served perhaps a little too cold. There is also a large selection of bottled beers in the fridges behind the bar, as you might expect from the Utobeer people. Two ciders are dispensed from cardboard boxes at the edge of the bar area, and they also do cocktails and "hoptails" photo of cocktail menu.

Music (Pixies, Iggy Pop, Tom Robinson) was playing during Kake's Friday evening visit in March 2012, at a level which made it slightly difficult to hear what one's companions were saying at times.

They serve food, which as of March 2012 is a combination of a small selection of dishes from other Westfield outlets along with meat/cheese based bar food: tapas dishes from El Cantara, pasta dishes from Pasta Remoli photo of tapas/pasta menu, and doorstep sandwiches, meat/cheese boards, and pork pies sourced from Borough Market photo of bar food menu. They are however also happy for you to bring food in from any of the other outlets in the shopping centre.

In March 2012, Kake tried the calamares a la Romana (£4) photo. The squid wasn't overcooked, and the batter was light, crisp, and non-greasy. However, they'd failed to remove the membrane from the squid (quite an elementary error), and the whole thing was a touch over-salted for my taste.

Accessibility: There are no steps into the bar, as it is on the same floor space as adjoining food outlets in the shopping centre. There's an accessible toilet next to the bar, with grab bars, an alarm cord, and lots of space inside (this is however the only toilet in the bar, so there may be queues at times).

Sarah adds: A note on ambience: one side of the bar is open to the mall, and the other two sides are glass. This means that the pub gets cold VERY easily. In cooler weather you won't take your coat off.

Getting here: It is recommended where possible that you use Stratford International DLR station (or the mainline, though additional fares are charged for using the High Speed rail service), especially if you want to avoid the rest of the shopping centre. The DLR is located on the far side of the mainline railway station concourse.