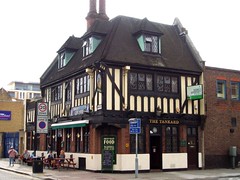 Greene King pub on Walworth Road in Walworth near the Police Station and Newington Library.

secretlondon popped in here one Sunday lunchtime and had a pint of coke (£2). They normally do food but had a sign saying that the kitchen was closed due to a gas leak. There was also a sign saying that children are welcome until 8pm. On a subsequent visit despite this sign they had stopped serving food at 3pm on a Sunday.

They had Greene King IPA on, and lots of lager. There was quiet background music and a projector that is presumably used for football.

Accessibility: There were no steps to enter and the toilets were also on the same level.