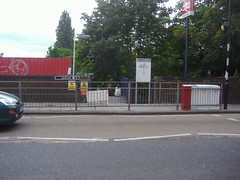 Note that as this is on a loop line, Waterloo trains go either clockwise around the loop via Brentford (the quicker way) or anticlockwise via Hounslow and Richmond (the slower way). The difference in journey time between the two routes is 17-19 minutes (33-35 minutes vs. 52 minutes). The two routes join up on leaving the loop at Barnes, and then continue to Waterloo via Putney and Clapham Junction.

According to the Wikipedia link below, the station has no surface buildings other than passenger shelters on the platforms (hence the rather nondescript entrance shown in the photo on this page).