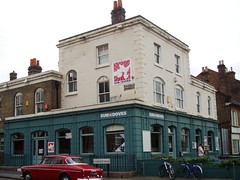 The Sun and Doves was a pub on Coldharbour Lane in Camberwell. It closed in September 2011.

As of late 2012, the premises have been taken over by Antic, who opened there as the Sun of Camberwell on 30 November 2012.

Pub on Coldharbour Lane in Camberwell. The front part is open and airy, with polished floorboards and posh-cafe-like tables and chairs. There's a nice cosy area to the left of the bar, with large leather sofas. They have some picnic tables out the front, plus a beer garden out the back which has been done up to accommodate smokers since the ban.

Kake visited on a Friday afternoon in August 2008; it was almost empty when I arrived but started to fill up shortly before 6pm. Beers on handpump were Adnams Bitter (£3.20/pint) and Old Speckled Hen. There was also a blackboard advertising "summer cocktails", all £5; amaretto sour, kahlua sour, and pisco sour. Music was playing, but not too loudly, though it did get turned up later on.

They offer free film screenings on Tuesday evenings, and live music too. There's a quiz on Wednesday nights at 8pm. Lots more details on the website.

They have free wireless broadband, but on an August 2008 visit Kake found this unusably laggy (coverage may vary throughout the pub; I was sitting on the sofas to the left of the bar).

There's a bicycle rack outside.

Comment added by Anonymous: Name is Jenny, worked in Sun and Doves in 1986, remember Denis (Drennan?) from Galway and Oliver from Donegal. There was also Bernie, from Roscommon? Don't know of their whereabouts now.