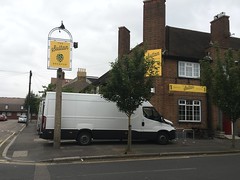 Pub lying roughly between South Wimbledon Station and Colliers Wood Station. Haydons Road Station is the nearest National Rail station, but is not as convenient and has a less frequent service than the Tube.

It serves Hop Back Brewery beers, and indeed is the only pub in London owned by Hop Back. The permanent ales are Hop Back GFB, Summer Lightning and Entire Stout. A fourth rotating ale comes from either Hop Back or Downton Brewery. There are also a selection of bottled Hop Back beers such as Crop Circle.

There is a permanent "happy hour" promotion of cheap draught beer from 6pm until 9pm on Mondays and Wednesdays. The current price as of August 2013 is £2.70 per pint despite the contrary claims of a long-forgotten chalkboard in the lounge.

It has a paved beer garden with about seven wooden tables, and two separate bars, with separate entrances. The one on the left photo can be reserved, and has a dartboard (darts in a jug on the bar) and two real fires.

They do not do food, though if you ask nicely at the bar they will usually allow you to bring your own in (including ordering in takeaways, if you ask really nicely). (Note: This was true two changes of management ago, so may not still apply.) They also sometimes have pie available photo from October 2013.

They experimented with brewing on-site around 2016, but according to the April/May 2017 London Drinker they have now given up on this.

When secretlondon visited in May 2016, they had four Hop Back beers on handpump. I had a half of Hop Back's taiphoon which was £1.58 (photo). They run a number of events including a twice yearly beer festival May 2016 events guide