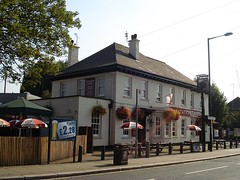 The Station Tavern was a pub in Brimsdown, right next to Brimsdown Station. According to WhatPub, it closed down in April 2017.

Pub in Brimsdown, right next to Brimsdown Station. Previously known as the Izaak Walton, it was renamed to the Station Tavern some time after July 2012.

It's a pretty standard chain pub, with traditional decor and food served all day. The interior is a single reasonably-sized room, with a pool table at one end flanked by high tables, chairs, and banquettes; the rest of the pub has normal-height seating. Beyond the pool table a door leads out to a small fenced-off patio with parasol-sheltered picnic benches, and there are more picnic benches out the front on the pavement and out the back next to the car park.

Kake and friend visited on a Thursday afternoon in September 2013. A handpump on the bar was clipped for Abbot Ale; they also had Ruddles Best and John Smith Extra Smooth on keg. A pint of lime and soda was 40p; unusually, they charge for this by the number of shots of cordial (20p each), and you can choose how many you want (soda is free). A bottle of Kopparberg Pear was £3.85.

According to a sign seen outside in September 2013, food is served noon-8pm every day.

Accessibility: A tiny step to get in. Step-free to the bar, seating area (including pool table), and toilets once you're in. There is an accessible toilet. The cubicles in the ladies' are very small and quite a squeeze to get into. The pub has a car park.