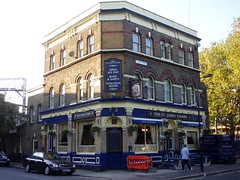 The St James Tavern was a locals' pub in Bermondsey, near Bermondsey Station. It has now closed. As of May 2014, the premises are occupied by another pub business called St James of Bermondsey.

The information below is retained for people who want to know what it was like as the St James Tavern.

Inside, it's divided into two halves, one with a pool table. There's also some seating out the front, picnic table style.

Kake visited on a weekday afternoon in March 2010. There were several people in, some of them engaged in conversation with the staff behind the bar. Some kind of blandish pop music was playing, but not too loud to get in the way of conversation. The side I was in has one handpump on the bar, which was advertising Marstons Pedigree. A pint of lemonade and lime was £1.70 — I'd asked for lime and soda, but the staff member who served me warned me that it would be expensive since they only had soda in small bottles, so I took her advice and went for the lemonade and lime instead.