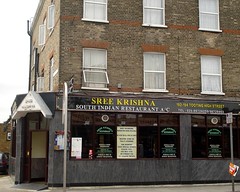 Sree Krishna was a South Indian restaurant in Tooting. It has now closed. As of mid-2020, Tooting Newsie reports that a pan-Asian restaurant called Bobochacha has opened in its place.

Restaurant in Tooting, in the 2007 Good Curry Guide, offering South Indian food as well as curryhouse standards. They say they specialise in Keralan food. They also do takeaway, and will deliver for free within a three-mile radius for orders over £20.

Inside, the tables are laid with white tablecloths, and set with wine glasses and cream linen napkins. (Fake) red rosebuds sit in vases on the tables. The chairs are tall, padded, and comfortable, upholstered with a blue and gold diamond pattern. Carved wooden panels are mounted at intervals on the pale yellow walls, and large shiny tiles cover the floor. Mirrored pillars break up the space a little. A bar at the back of the room holds fonts for draught Cobra and Kingfisher.

Their menu is available on their website. Although the restaurant isn't vegetarian, they offer a good selection of vegetarian dishes, particularly in the starter section (which also contains some dishes such as masala dosa that could be considered light meals in themselves).

Kake visited on a Wednesday late lunchtime in June 2009. Arriving around 2pm, I was the only customer apart from a group of six who were enjoying pints of lager along with their curry lunch. There was no background music.

I decided to order two dishes from the starter menu, rather than starter plus main; they didn't seem to mind this. I also asked for tap water, which came fairly swiftly in a pint glass with ice.

Cauliflower 65 (£3.90) photo was a nice vegetarian variation on the more-common chicken 65; it was quite tasty, crisp enough, and not overly greasy. Although chicken 65 is normally a hot dish, I'd have classed the spice level of this one as fairly mild. The accompanying creamy sauce was sweeter than I would have liked.

My other dish was the meat masala dosa (£4.90) photo. The dosa was thicker than other masala dosas I've had, and not crisp at all. The minced meat in the filling was quite subtle, and basically hidden by the mashed potato, but I liked the inclusion of peas and carrots. The sambar (thin curry accompaniment) was unremarkable; I did like the tomato/red pepper chutney served on the side though.

Service was a little awkward. It's hard to put a finger on what exactly was wrong, but I felt the staff were hanging around quite distractingly and obviously, even when it was clear that none of the diners needed anything and there was plenty of time left before the end of lunch service at 3pm. The chap who spent quite a lot of time staring out at us from the hatch between the restaurant and kitchen didn't help matters either.

secretlondon visited for lunch one weekday in July 2016. I was the only customer. I had paneer biryani (£6.70) which was lovely, served with a vegetable sauce and a lovely raita with crunchy onions. They were advertising cocktails at the bar so I presume it is licensed.

Accessibility: Shallow ramp to get in, another small ramp to the toilets. The cubicle in the ladies' is quite large, the size you normally see for an accessible toilet, though there are no grab bars.