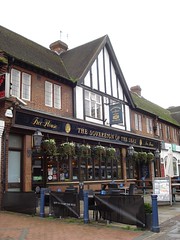 Sovereign Of The Seas, BR5 1DG

Sovereign Of The Seas, BR5 1DG

It's a fairly standard Wetherspoons, with a low ceiling and a long room stretching back from the street frontage. There are several booths towards the back. There's some outside seating at the front, not under cover. Displays on the walls give details of local history, including how Petts Wood got its name. There are a dozen handpumps on the bar, in two banks.

Kake visited on a Saturday morning in October 2013. The handpumps offered Westons Wyld Wood cider, Oakleaf Cream of the Crop, Brewster's Aromatic Porter, Everards Sgt Pepper, Elysian Avatar Jasmine, Thwaites Half Nelson, and one or two other interesting ones as well as the usual Ruddles etc. A pint of lime and soda was 65p.

Flatscreens were showing the news with the sound off (and no subtitles). As usual for a Wetherspoons, no music was playing. There was a reasonable buzz of conversation which however failed to drown out the hum of the fridges.

The lighting was low — it'd have been a struggle to read a book. Service was friendly.

The have free wireless via The Cloud (free registration required).

Accessibility: No steps to get in, and it's step-free to the bar, seating, and toilets once you're in.