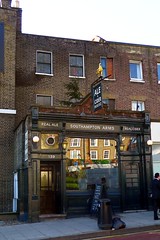 It was previously cash-only, but started accepting cards in October 2018. Higher-strength beers are priced in proportion to their alcohol content: as at February 2019, for ABV over 4.5%, a keg pint is £1.06 per ABV percentage point, with £0.86 for cask.

Inside it's rather small, comprising a long thin space, decked out with rickety wooden chairs, benches and tables, and a bare wooden floor. Tables are mainly quite small, but there's one larger one opposite the bar. There's a beer garden out the back with some shelter. Although there's a nice big window at the front to let the daylight in, it's very dimly lit in the evening, to the point where it's difficult to read a book. Music is provided via a turntable behind the bar — they have a policy of only playing vinyl.

They serve an interesting range of real ales and ciders, as well as two Camden Brewery lagers (£3.20/pint) as of October 2010 (these two taps had previously been Meantime). Drinks are served in dimpled handled jugs (except the lagers). As of July 2010, all ciders and perries are £3.20 (a four-pint jug is £12.20) and real ales are £2.90 (with a four-pint jug £11.20). They will do four-pint takeaways, charging you a £2 deposit for the container.

On bob's July 2010 visit all 12 hand pumps photo had something on, and there were three extra poly-pins of cider on behind the bar, for a total of 7 ales, 7 ciders and 1 perry — examples included Ottley No. 1, Maypole Mild, Chocwork Orange, and Dark Star Extra Stout (the latter of these being the only ale coming from a brewery you regularly see elsewhere). Two of the ales were finished during our visit and replaced with something different. All of the ales were very good, as were the ciders and the perry. On Ewan's visit a couple of days later, there were 7 ales and 4 ciders (including ales by Dark Star, Red Squirrel, Art Brew and others, with ciders by Millwhites, Burrow Hill). We also noticed that they had a suggestion form for beer or ciders you would like them to get.

More handpulls had been added by Ewan's October 2010 visit, with an additional six along on the wall behind the bar, all offering ciders on that visit. In October 2017, a half of Gyle 59 Caribbean Cocktail was £1.95.

Food is pretty basic, consisting of pork pies (£3 for half a large one) photo, sausage rolls, pickled eggs, scotch eggs (including vegetarian ones), a cheese selection, salami, and roast pork baps. bob's pork pie was very tasty and had the right amount of jelly, i.e. not noticeably any. The sausage roll was good too, with lots of onion giving the sausagemeat a nice sweet taste.

On a Thursday night it was busy inside and out with a crowd of friendly people. The bar staff were pleasant and seemed to be actually enjoying themselves. On a Tuesday afternoon in October 2017, there were four other customers at 4pm and music was playing, relatively interesting and not too loud.

According to a board seen in October 2017, there's a quiz night from 8:30pm on Mondays, and live piano music on Tuesdays, Wednesdays, and Sundays.

bob's verdict: As a real ale drinker, I'd say this pub has joined the ten or so pubs in London which are really worth going to. If you drink real cider you should stop what you're doing and go right now.

Accessibility: A large step to get in. At least one extra step to the gents', which are technically outside. There is not much room to manoeuvre inside.