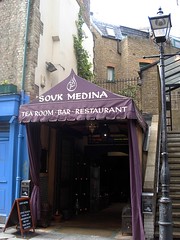 It's entirely candle-lit, and the seating arrangements are fairly informal-feeling. We were seated in a side room with low, padded benches around the walls with circular tables at intervals; it looked as though it could have been easily adapted to any size of group. The decor was of the type that usually seems to be described as "opulent", though the lighting was rather too dim for close examination.

The food was good enough — we had the set menu at £20/person (it's £16.50 at lunchtime), and particularly enjoyed the chicken in our main-course tagine; well-flavoured, and tender without being mushy. (Vegetarian and pescetarian set menus are also available at the same price.) The mint tea that we finished our meal with was also good, sweetened just the right amount, and with a very fresh mint flavour. However, the service was a little disorganised and confused; they forgot to bring the baklava and mint tea that were included in our set menu until we asked for them (and they were extremely apologetic, so it does seem it was a case of actual forgetting, rather than just us being overly impatient), and we also had a long wait between starters and main course.

The ambience was a little confusing. There was rather a tendency towards exoticism; not only the decor and the music, but also the jingly wraparounds worn by the female waitstaff, and the black-man-in-a-fez at the entrance, and the obligatory bellydancer who came around partway through the evening. In contrast, most of the customers were very English-acting, to the point of completely ignoring the poor bellydancer.

claud liked this place a lot, but Kake probably wouldn't come back, unless just for a cocktail (you can come here just for a drink, without dining). They do have an interesting range of cocktails (we tried the Ali Baba, which includes amaretto).