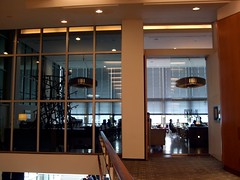 A restaurant and bar in the Royal Festival Hall, part of the Southbank Centre, alongside the Thames.

This large space occupies much of the front of the building on the first floor, commanding excellent views of the Thames. In the centre of the room is a bar, on a raised level, with a little seating around it. There are also seats along the front, by the windows, some for drinkers and others for those dining, tables for which occupy much of the eastern half of the room.

The food menu itself can be found online, though Ewan didn't sample the food on this visit.

We were there for cocktails, which the bar menu specalises in. Most are £9.50, though champagne cocktails are a pound more. There were some bartender's specials (Sarah had a good gin and tea based one photo), as well as seasonal cocktails -- Ewan's was the Right Thing, featuring gin, aperol, elderflower liqueur, lemon and peach bitters, and was alright photo. Alex had the mint julep, which got a positive response and certainly looked the part photo. We followed with three more, including a perfectly good Sidecar photo. Cocktails were good, not overly fussy in their ingredients, without being outstanding in quality.

Bar snacks were provided free of charge (some roasted nuts and corn kernels, with dried cranberries), and the waiting staff were courteous, all dressed in somewhat designer uniforms. The seating was almost too expansive, but the setting was comfortable and the views were of course excellent.