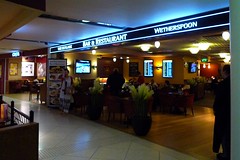 The Skylark was a Wetherspoons pub on the landside of Terminal 1 at Heathrow Airport. It has now closed, along with all the rest of Terminal 1.

A Wetherspoons pub on the landside of Terminal 1 at Heathrow Airport.

There's a standard range of seating, small tables dotted about a largely square space, with a few larger tables along the sides and down the back.

At the bar, there are four handpulls, offering Abbot Ale, London Pride, Adnam's Bitter and Thatcher's cider on a July 2012 visit. In 2009, three were serving guest beers from the ale festival that Wetherspoons were running at the time, with three thirds being sold for the price of a single pint (£2.29). There were also standard lagers, as well as a newly-installed font for Harviestoun Schiehallion in July 2012 (£4.55/pint), an excellent beer.

Service was perfectly friendly and accommodating, though given its airport location, it wouldn't be fair to criticise the ambience.