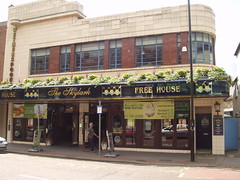 The Skylark was a Wetherspoons pub in Croydon. It closed for good in March 2022.

Wetherspoons pub in Croydon, in the Good Beer Guide.

The ground floor is fairly open, with a raised area containing bookshelves (with real books!). There are a few sofas at the front, as well as booths around the edges of the room. A line of high chairs and tables stands opposite the bar. Some of the seating is on a dais. There's more seating upstairs on the first floor, and there's a small paved beer garden out the back.

Daytimes, the clientele are generally your standard daytime drinkers; old men nursing a pint per hour before gently staggering off home in the early evening. In the evenings, you do get a few groups of lager drinkers, but not the overly rowdy kind. It's a fairly standard Wetherspoons, but overall it's pretty good here if you know what to expect.

On Kake and bob's October 2012 visit, there were more than half a dozen real ales on, including B & T Edwin Taylor's Extra Stout, Sambrook's Wandle and Junction, Dark Star Festival, Pilgrim Templar, Adnams Lighthouse, and Spitfire. They also had a Weston's cider on handpull. Service was friendly and informative, but sadly the ales were served rather too cold.

The food menu is absolutely standard across all Wetherspoons, but service is friendly enough and prices are good. As of April 2017, breakfast is served from 8am.

Accessibility: Step-free to get in, to get to the bar, and to get to some of the seating; and there's a RADAR-locked toilet on the ground floor. Other toilets are up a flight of stairs with a sturdy handrail.