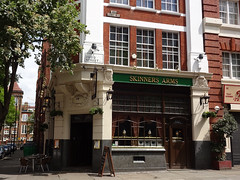 Greene King pub near King's Cross Station. Note that it's closed on weekends.

The Skinners Arms was the London regional winner in the Perfect Cask Ale category of the 2007 Abbot Ale Perfect Pub awards. In October 2007, most main meals were £5.25, steak was £6.45, and the guest ale was Landlord.

On Ewan's January 2010 visit, the place was completely rammed on a Friday at 5:30pm (though had become somewhat more manageable by around 7:30pm), as it attracts office workers from the nearby Council offices. It's also not unusual to get blind drinkers from the RNIB which is very near.

Seating takes the form mostly of small tables, with a number on a raised area opposite the bar, as well as larger tables down the back.

There are around eight handpulls, mostly with Greene King ales (IPA, Abbot Ale and seasonals), with a couple of guests including Newman's Mammoth on a January 2010 visit.