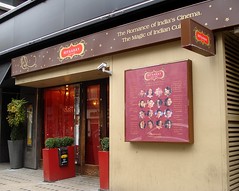 Now closed; was an Indian restaurant on Drury Lane in Covent Garden.

It offers an all-you-can-eat dinner during the evening Monday to Saturday. When elvum and friends visited in June 2008, this meal consisted of a series of grilled meats and fish interspersed with simple meat and vegetable curries, such as saag aloo. It was exceptionally tasty, and even at £19.50 a head, good value.

They have an interesting cocktail menu, including some lassi cocktails, all of which are named after Bollywood films. The decor is also very Bollywood-influenced - lots of photos of stars, and a couple of (ornately framed) televisions showing dance numbers from Bollywood films. There is a good selection of desserts, including the surprisingly hard-to-find ras malai.

All the food is halal (except for the alcoholic drinks, obviously).

Note the rather complicated opening hours.