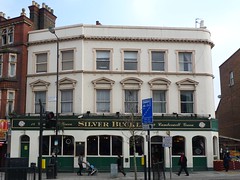 The Silver Buckle was a pub at Camberwell Green. It closed in mid-2009, and was acquired by Antic, then reopened as The Tiger in late February 2010.

The information below is retained for people who want to know what it used to be like as the Silver Buckle.

secretlondon visited in September 2008. There was quiet music and football on TVs, which was turned up when the England match started.

They had two hand pumps with nothing on them, and a pump with green label which was off. The only bitter they had was John Smith's Extra Smooth (£2.60/pint).

They have a beer garden for smoking and notices advertising karaoke nights. The ladies' toilets had no seats and were covered in graffiti.