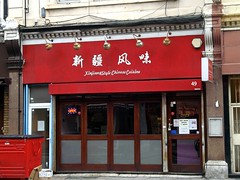 Chinese cafe-style restaurant and takeaway on Camberwell Church Street in Camberwell, specialising in food from Xinjiang, a large autonomous region in the northwest of China where the default meat is lamb (rather than pork, as in most of the rest of China).

Its Chinese name is 新疆風味 (Xīnjiāng fēng wèi), which roughly translates as something like "Xinjiang local flavour". The menu is in Chinese with an English translation — see Kake's Flickrset with photos of the menu. The decor is quite plain, and the seating is at long tables with wooden benches photo. Note that as of September 2010 they're cash only.

When nine of us visited on a Monday evening in September 2010, the place was busy — it's a good thing we'd booked. Service was still good, efficient and friendly. Despite the meaty nature of much of the menu, the vegetarian in our party was as happy as the rest of us. On this occasion we spent just £15/head, including booze and tip. Our later visits were in smaller parties, and ended up being a little more expensive.

We've generally enjoyed most of the food here, with a couple of exceptions. The menu is divided into cold dishes, hot dishes, Xinjiang-style dishes (including skewers), noodles, and dumplings.

Among the cold dishes, spicy salad/tiger salad (老虎菜/lǎo hǔ cài; £3 in Sep 2010) photo was cruder than renditions Kake has had elsewhere, consisting simply of large chunks of tomato and onion topped with handfuls of fresh coriander. Mixed shred salad (拌三絲/bàn sān sī; £3 in Sep 2010) photo was similarly simple; nicely garlicky dressing, but dominated by the glass noodle vermicelli rather than an even mix of the three shreds advertised (carrot and spinach should have been the others). Cucumber in sauce (涼拌黃瓜, sampled in Oct 2011) photo was both refreshing and flavourful.

The hot dish selection includes plenty of vegetable dishes. Home style aubergine (家常茄子/jiā cháng qié zi; £5 in Sep 2010, also sampled in Oct 2011) photo, although not really a Xinjiang dish, was one of Kake's favourites in our order; the aubergine was peeled before cooking to a perfect texture, and the sauce was quite balanced if fairly nonspecific in flavour. Sour and hot shredded potato (酸辣土豆絲/suān là tǔ dòu sī; £4 in Sep 2010) photo was also good, with the potato slivers nicely judged to be crisp yet not undercooked.

Cabbage in vinegar sauce (醋溜白菜/cù liù bái cài; £4 in Sep 2010) photo was somewhat unbalanced, with the vinegar flavour coming across as harsh rather than tangy. Home-style cabbage (熗蓮白, sampled in Oct 2011) photo was much better, cooked just enough to stop it tasting raw, leaving it crisp and juicy.

We've also tried a few of the meat-based hot dishes. DrHyde and friends enjoyed the double-cooked pork slices (回鍋肉) in August 2011. Kake et al. were less impressed by the stirfried chicken gizzards (孜然雞胗) photo in October 2011; they were really much chewier than optimal.

Big plate chicken, a Xinjiang specialty (£15 in Sep 2010) photo was delicious; the flavours in the gravy were much more complex than in the other dishes, and the chicken was neither mushy nor bland. Both Kake and Laura wished we'd ordered more of this.

None of our party were keen on the famed lamb skewers (80p each in Sep 2010, also sampled in Aug 2011) photo; the spices on the lamb skewers were overwhelmingly powdery rather than flavourful, and the meat wasn't as deliciously crisped as one might have hoped. Lamb kidney skewers (sampled in Oct 2011) photo were better, with much less powderiness.

Boiled dumplings (£2.50/10 in Sep 2010) photo didn't particularly impress DrHyde; there was nothing wrong with them, they just didn't stand out. Kake rather liked them though; this style of dumpling isn't meant to be particularly refined, and it's hard to complain at this price.

secretlondon has also visited here, on a Sunday evening in February 2009, ordering lamb with noodle and egg (£7) photo, 10 dumplings (£3) photo and a pot of tea (£1). Background music sounded like Chinese easy listening.

Kake's verdict: It's a testament to the quality of regional Chinese food currently available in London that I can even think of criticising the food we had here. It was certainly all a lot better than your average generic Anglicised Chinese, it was very cheap, and it's the only place I've ever had Xinjiang food in London. I just felt that it wasn't quite as good as all the rave reviews had led me to expect, which is more to do with me than with the restaurant. Having said that, I've been twice now and would go again!