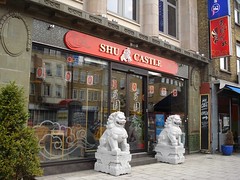 Shu Castle was a Sichuan restaurant on the Old Kent Road. It has now closed. As of early 2017 the premises are occupied by a Chinese restaurant and bar called Wonton.

It opened some time around the start of 2011, replacing another Chinese restaurant (Dragon Inn, the sister of Dragon Castle in Walworth — Shu Castle and Dragon Castle do appear to still be related). It became much smaller in the process, with space now given over to two large private/karaoke rooms and only around 30 covers in the main dining area.

The decor is bright and modern, with crenellated interior walls echoing the castle theme. Most if not all of the tables have hotpot burners in them.

Kake, bob, Laura, and Les first visited on a Sunday evening in April 2011. We hadn't booked, and there were quite a few families in (it was Mothering Sunday), but we only had to wait a moment for a table to be prepared for us. On another Sunday evening visit by Kake, Les, and KC a couple of months later, it was again pretty full at 7pm (we think with a tour group) but they just managed to squeeze us in.

A cold dish of marinated black fungus (爽口木耳/shuǎng kǒu mù ěr; £4.90 in April 2011) photo had a nice texture, and was fairly spicy. Sometimes this dish is seasoned with vinegar; this version appeared not to be. Meatball soup with beansprouts (豆芽園子湯/dòu yá yuá zi tāng; £4.90/portion in April 2011) had a well-flavoured broth and pleasantly loosely-textured meatballs.

We also tried a couple of Sichuan snacks/small eats. Lotus leaf harrow (葉耳耙/yè ěr pà; £3.80 in April 2011) photo turned out to be a sort of mochi-like glutinous rice wrapper with meat inside; quite tasty. Sichuan xiao long bao (四川小籠包; £3.80 in April 2011) photo were quite unlike the more common Shanghai xiao long bao. These had thicker, leavened wrappers and contained shredded meat seasoned with soy sauce; again, they were quite tasty.

Our final bill for food alone, including the auto-added 10% service charge, was £17/head the first time and £20/head the second time. Tea was an additional £1/person. They also have a reasonable wine list; a bottle of pinot grigio on our first visit was £18.80 and sauvignon blanc on our second was £13.50.

Kake's verdict: I've been twice now and I'm still keen to come back.

Accessibility: Step-free access via a ramp (all access is via the lobby of the hotel next door). There are a few corners to negotiate on the way though. Step-free to the toilets once you're in.