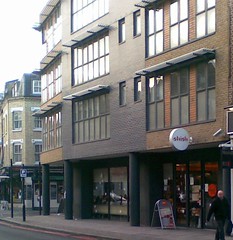 Shish used to be a Middle Eastern restaurant on Old Street in Hoxton, part of a small chain. It closed down in mid-2009. As of late 2009, word is that the new occupant of the space will be another branch of Busaba.

The information below is retained for people who want to know what it was like as Shish.

Apparently this is one of a 3-restaurant chain (the others being in Bayswater and Willesden Green).

The restaurant part is on the ground floor, and has glass-and-wood type decor. There's a long dining bar with tall stools, and plenty of tables, which are reasonably well-spaced for a London restaurant. Downstairs has a cocktail bar with leather armchairs; I think they have DJs down there some evenings.

The food is good and reasonably priced. There's a sample menu on the website. Plenty of veggie options, and some vegan options; although more in the mezze than the shish kebabs or other main course dishes. Pete felt that his halloumi and veg kebab could have had a few more pieces of halloumi, but I was very happy with my roast veg kebab. The mezze are probably a bit more interesting than the kebabs, but that's a common problem with this sort of restaurant (at least if you're veggie/vegan). I think that you'd be allowed to just eat mezze if you wanted, but am not sure.

Comment added by Bob: Free wifi. Menu not that cheap if you deviate from the meal deals. Staff friendly. Do takeaway. Can sit at a counter and watch chefs. Water on tap at counter. Has a special Christmas menu; three courses for £19.95.